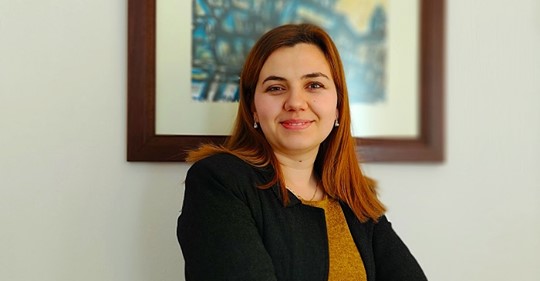 Erilda Krasi of 1001 Albanian Adventures, a tour operator based in the city of Berat, has won the third ARLEM Young Entrepreneurs Award, beating contenders from nearly two dozen other young, small businesses from around the Mediterranean. The award, which has been presented annually since 2019 by the Euro-Mediterranean Regional and Local Assembly (ARLEM), celebrates both the work of entrepreneurs younger than 35 and efforts by local authorities to foster business-friendly policies. The evaluation committee, which includes organisations actively engaged in promoting an entrepreneurial environment in the Mediterranean region, praised the work of 1001 Albanian Adventures as an example of sustainable and responsible tourism that is helping to regenerate the local economic fabric and urban environment.

Ms Krasi, whose business now has up to ten team members during the tourist season and can also call on the support of volunteers as guides, said: “This prize came as a ray of hope in this difficult period for the whole world, especially for the small business operating in tourism. It transmits a strong encouraging message that hard work will be rewarded and we come out stronger after difficulties. Thank you for this opportunity, thank you for a new window ‘opened’ for us. Ms Krasi, who began her business while a university student, said that the main reason forsetting up her own company was the heart-breaking” sight of seeing friends leave the country to find work abroad. She initially focused on attracting other young people to work in the company. The companys strong commitment to the local community is reflected in its Solidarity Shop Berat which sells products made by people with special needs and other disadvantaged groups, as well as goods produced by local farmers and artisans. It is similarly committed to sustainable tourism – the company promotes walking and cycling tours, camping, and since 2017 has
developed a number of projects focused on eco- and agro-tourism – and to environmental protection, including running clean-up campaigns and installing litter bins.

The city of Berat has several projects through which it seeks to support small enterprises in the tourism sector, with activities such as workshops, fairs, and shows. It also works with schools and young people to develop an interest in the tourism sector. ARLEM brings together local and regional politicians drawn from the 42 countries in the Union for the Mediterranean. The award was presented to Ms Krasi on 22 February at ARLEM annual plenary, which was addressed by the presidents of the European Committee of the Regions and of United Cities and Local Governments (UCLG), the European commissioner for the neighbourhood and enlargement, and the secretary-general of the Union for the Mediterranean. The European Bank for Reconstruction and Development (EBRD) in Albania and the EU delegation in Albania announced, based on the outcome of the award, that they would invite 1001 Albanian Adventures to join the EBRD Tourism-Led Model for Local EconomicDevelopment Support Programme in Albania. The programme, which is partly funded by the EU, is currently running pilot projects in four locations, including Berat. Ms Krasi will also receive training and her business will be given priority access to tailored advisory business services.

The ARLEM award, which is open to entrepreneurs from non-EU countries, drew applicants from ten countries: Albania, Algeria, Egypt, Israel, Jordan, Libya, Mauritania, Morocco, Palestine, and Tunisia. All the companies have been active for three years or more. Four other entrepreneurs were shortlisted for the ARLEM award: Ahmed El Sadi of Blue Filter, a waste-water treatment company in Palestine; Amal Labriny, who runs an agricultural cooperative in Morocco; Mustapha Samir Laoufi, who established a solar-panel company in Algeria; and Abdelkader Zerrougui, manager of a water and waste-management company in Algeria. The evaluation committee included representatives from: the Union for the Mediterranean; the European Training Foundation; the European Commission’s Directorate-General for Neighbourhood and Enlargement Negotiations and Joint Research Centre;  MedCities  and the Inter-Mediterranean Commission of Conference of Peripheral Maritime Regions;  Eurochambres ;  Womenpreneur ; and Anima Invest. The evaluation committee was chaired by the European Committee of the Regions, which serves as the secretariat of ARLEM. The first two awards went to fashion business for women –  Zimni Jadeed  – based in Tripoli, Libya, and to a data-processing business – Rima Dates – in Ghardaia, in southern Algeria.